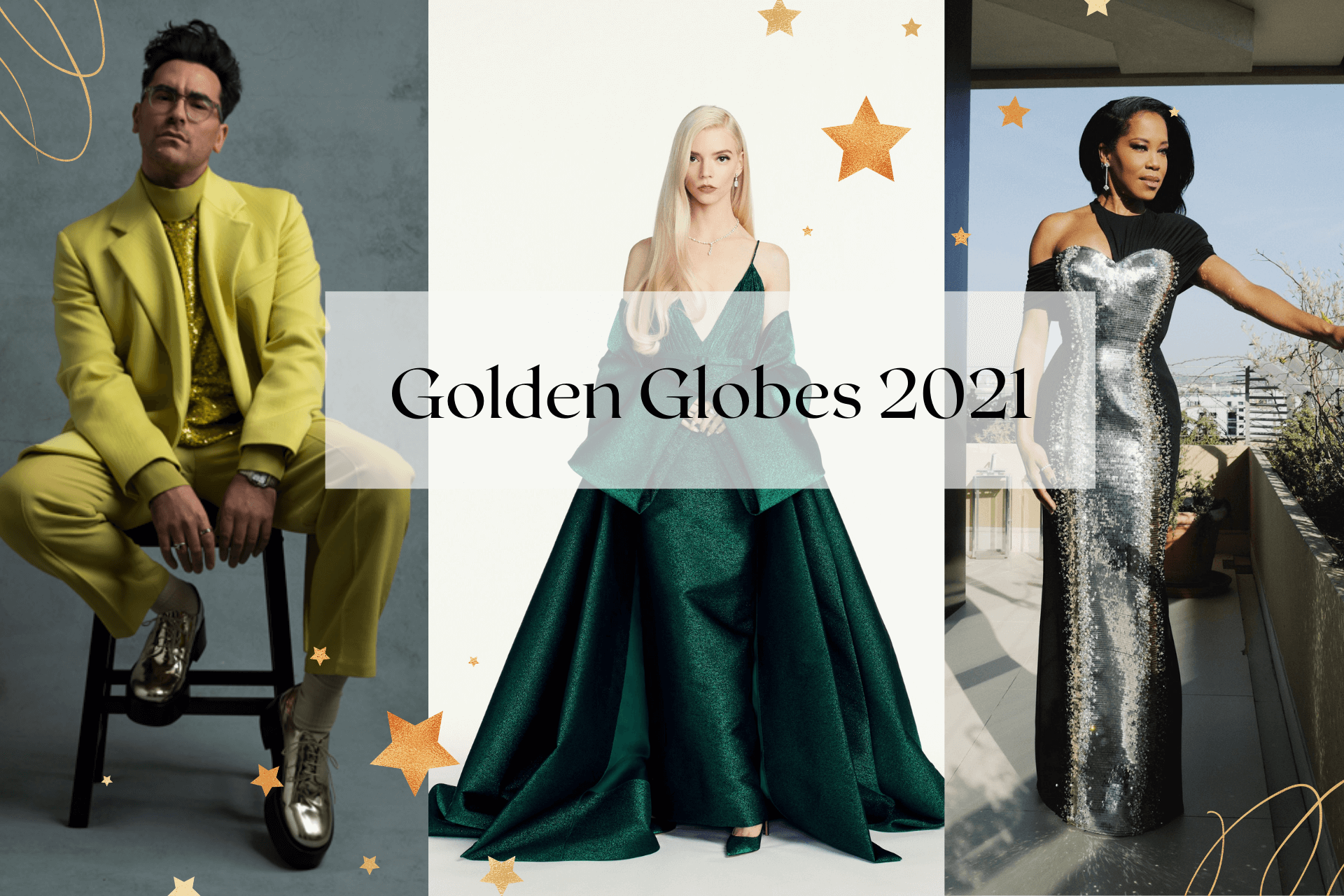 The 78th annual Golden Globes 2021 event happened over the weekend, albeit with the woes of virtual magic. Soul, The Crown, Schitt’s Creek and of course the Queen’s Gambit are just a handful of masterpieces that took home awards this year. It was also a year of firsts, Chloe Zhao was the first Asian woman to win a Golden Globe for Best Director of Nomadland and Andra Day won Best Performance by an Actress in a Motion Picture in The United States vs. Billy Holiday making her not only the second-ever black actress to win the category but also the first to do so in 35 years! Another thing we can count on was the elaborate, intricately woven, ethereal outfits of the evening and I’ve discovered my favourite outfits of the evening. Let me know yours!

Viola wore Lavie by CK, whose designer Claude Kameni, created a beautiful mermaid-style patterned dress accessorized by silver chain details. An empowering nod to black girl magic. Kameni, naming her fashion brand after the French word “life” ensured that Davis brought exactly that to what might possibly be her backgarden. Still, she is flawless and this dress is simply stunning.

Who loves orange soda!? Not Keenan, he’s in a slick olive green with satin detail on the lapels and dark green lined pocket with a satin bow tie to match. Thompson is wearing Bogard by Mike B, who was crowned as “Prince of Fashion” by Ralpha Lauren deems his work as “democratic” and strong on the idea that everyone has a right to express their individual style and he’s right!

Jamie Lee Curtis looking stunning in a long sleeved, satin, plunging neckline gown. It sinched in a the waist beautifully, even the detail of her pointed shoulder pads, the whole look is beautiful. She wears Alex Perry who began designing haute couture gowns in 1992, he’s now based in Sydney and known as one of Australia’s premier couturiers.

Andra Day looks incredible in a mesh chained detailed, elaborate tutu by Chanel. Not only did she win a Golden Globe for Best Performance by an Actress in a Motion Picture in The United States vs. Billy Holiday but she became the second-ever black actress to win the category and the first to do just this in 35 years! She is GLOWING.

Who watched and loved Schitt’s Creek with all their heart!? I DID. It’s no secret that Dan Levy has an eye for beautiful outfit pieces and accessories. This outfit sports a glitter turtle neck, yellow Valentino tuxe and golden platform laced up shoes. He gushed at Vogue that “It just felt like the perfect balance between formal and casual, festive and laid back, polished yet unfussy,” he says. “And the color! Citron? Lemon? Whatever you’d like to call it, it was the best of what men’s fashion has to offer: statement-making, without taking itself too seriously.”

When I came across this photo, I had to do a double take laced with awe. This dress is a flattering optical illusion. The metallic silver detail creates a beautiful silhouette, which still accentuates her curves. She wear Louis Vuitton and pairs it with an elegant pair of silver drop earrings. Vuitton reps told Insider that King was covered in “40,000 multicolored sparkles and crystals, and took more than 350 hours to make.” Incredible!

Angela looked like pure royalty in this purple gown with boa feather embellishment and sequin detail, she glows in Dolce and Gabbana. It’s accessorized beautifully with silver earrings and her hair is braided thick while her makeup pays homage to her gown with purple shadow and a soft lilac lip colour.

Amanda Seyfried wore a coral peach pink (why not say all the colours?) Oscar De La Renta gown with silk-taffeta embellished floral detail. Her silver jewellery is ethically-sourced natural diamonds from Forevermark. Elizabeth Stewart, Seyfried’s stylist told People Magazine that “It is extremely important that we work with ethical diamonds,” Stewart says. “The yellow in the diamonds is just right with the coral in the dress. I love the simple ring of diamonds around her neck.”

What was your favourite look? 💃🏻

I'm a 25 year old Marketing Assistant that loves Jesus and jasmine rice. I love writing and rambling about all things: faith, lifestyle, tech, reviews, work and so many random things!